A simple, authentic gastronomic culture with a classic and unique taste. Our recipes are passed down from one generation to another through a consolidated experience and the passion for the Apulian tradition.

Nonna Mariangela offers typical specialties made with great care, by using the finest ingredients, which are carefully selected, GMO-free and without preservatives. Our products are highly digestible and they have the fragrance, the flavour and taste of times gone by. Nonna Mariangela tells of the most delicious flavours of Puglia.

A taste of our products will let you discover the natural and architectural treasures of Valle d’Itria and Alberobello.

Alberobello is one of the 50 UNESCO World Heritage sites in Italy and it is famous all over the world for its characteristic cone-roofed houses called trulli. The name derives from the late Greek word for dome (τρούλος) and refers to the cone-shaped stone houses that originated in prehistoric times.

The limestone used to build trulli is from Murge, the main karst area in the central part of Puglia. Since trulli were dry-wall constructions made without mortar and wood, they came to be identified as temporary and unstable, easy to demolish and not taxable. As a matter of fact, the prohibition of the use of mortar and cement was imposed on the peasants of the area by their lords, the Counts of Conversano, in order to evade an edict by the Kingdom of Naples that demanded tribute, or tax, on every new urban construction. Although these particular dwellings are free from any elements of support or linkage, they are stable and solid.

Trulli denoted the great ability of the master craftsmen, who showed their building skills. Some of the trulli have curious whitewashed symbols painted on the roofs. Each symbol has its own meaning on the basis of which they can be classified as prehistoric, magical, pagan, Christian, decorative and grotesque. Originally, symbols were painted on the roofs against the evil eye and to bring good luck to the residents of trulli.

Then they linked to the Christian faith of which they reproduce the most common symbols. Trulli, which are still used as homes, represent an ingenious example of spontaneous and unique architecture and they are a proof of a past cultural tradition. 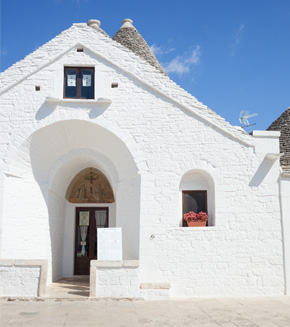 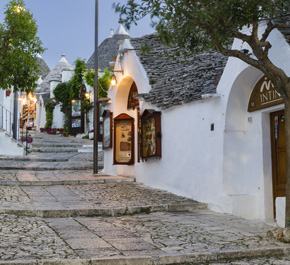 THE ENCHANTING SCENERY OF THE VALLE D’ITRIA

Alberobello is the only town in Valle d’Itria with such a large number of trulli. The “Valley of Trulli”, which is very well known for its architectural beauties and specialties, is a unique ecosystem characterized by rolling hills, majestic centuries-old olive trees and vineyards. This amazing area represents the beating heart of Puglia because it is the middle of the region, moreover, it encloses all the peculiarities of this marvellous land: a gentle, charming countryside surrounded by monumental olive trees, manor farms and a clear blue sea. This land boasts an authentic food and wine heritage rich in delicious specialties in compliance with the Mediterranean cuisine.

Polignano and Monopoli are two enchanting villages situated on the North coast of Puglia.

Polignano is a lovely town situated along the Via Traiana, the ancient Roman road. The town, featured by beautiful bays and an old town centre located at 30 metres above sea level, overlooks the crystal blue sea that every year is the setting for international diving competitions. Among its bays it is possible to admire the ancient Benedictine Abbey of San Vito.

Moving south, you get to Monopoli, characterised by castles and marvellous palaces, and then Fasano, known for its famous zoo, one of the most important in Europe, and for the Torre Canne Thermal Spa. Finally, you reach Ostuni, the so-called Città Bianca (the white town) for its peculiar old town centre whose houses are entirely whitewashed. Ostuni is a gem overlooking the Adriatic sea and it shows some of the most beautiful bays along the coasts of Puglia that stretch up to the marine protected area of Torre Guaceto.

Moving into the inland, you can admire gentle slopes, manor farms, trulli and endless olive groves. Going northwards, you get to Cisternino that is ranked as one of the 100 most beautiful villages in Italy, together with the picturesque town of Locorotondo, whose old town centre is full of narrow streets and houses made from local stone. Locorotondo is only 10 km away from Ostuni and 9 km from Alberobello. Finally, Castellana Grotte, with its charming karst caves, is just 10 km away from Alberobello.

The wonderful bays and the white sandy beaches of Torre Canne and its Regional Park called “Parco delle Dune Costiere” are unique in Puglia. Other sites deserve mention, for example Bari, Taranto, Lecce, Castel del Monte and Matera (UNESCO sites) that are only one hour by car from Alberobello.